Menu
Log in
Register
Install the app
You are using an out of date browser. It may not display this or other websites correctly.
You should upgrade or use an alternative browser.

Staff member
....another year/ month/week/day where everything turned out different than planned

The Tanjil Fire Tower ride turned into a 300km solo-loop to Melbourne's north-east.

Lots of dust and gravel, some new spots aimed for, some old ones revisited...some State Park tracks, some iffy clay + rock climbs....and the weather played along brilliantly.

The recent RailTrail pushbike ride had thrown up yet another reminder to go and finally check out this "Flagpole Hill" we'd been going past for the last 30 odd years.


First via Steels Creek and the slippery, steep loose-gravel dive of Hunts Lane Cutting into Dixons Creek, finishing next to the Cafe/ Grill there to dodge at least some of the atrocious holiday traffic on Melba Hwy. https://bit.ly/3mF6kyf 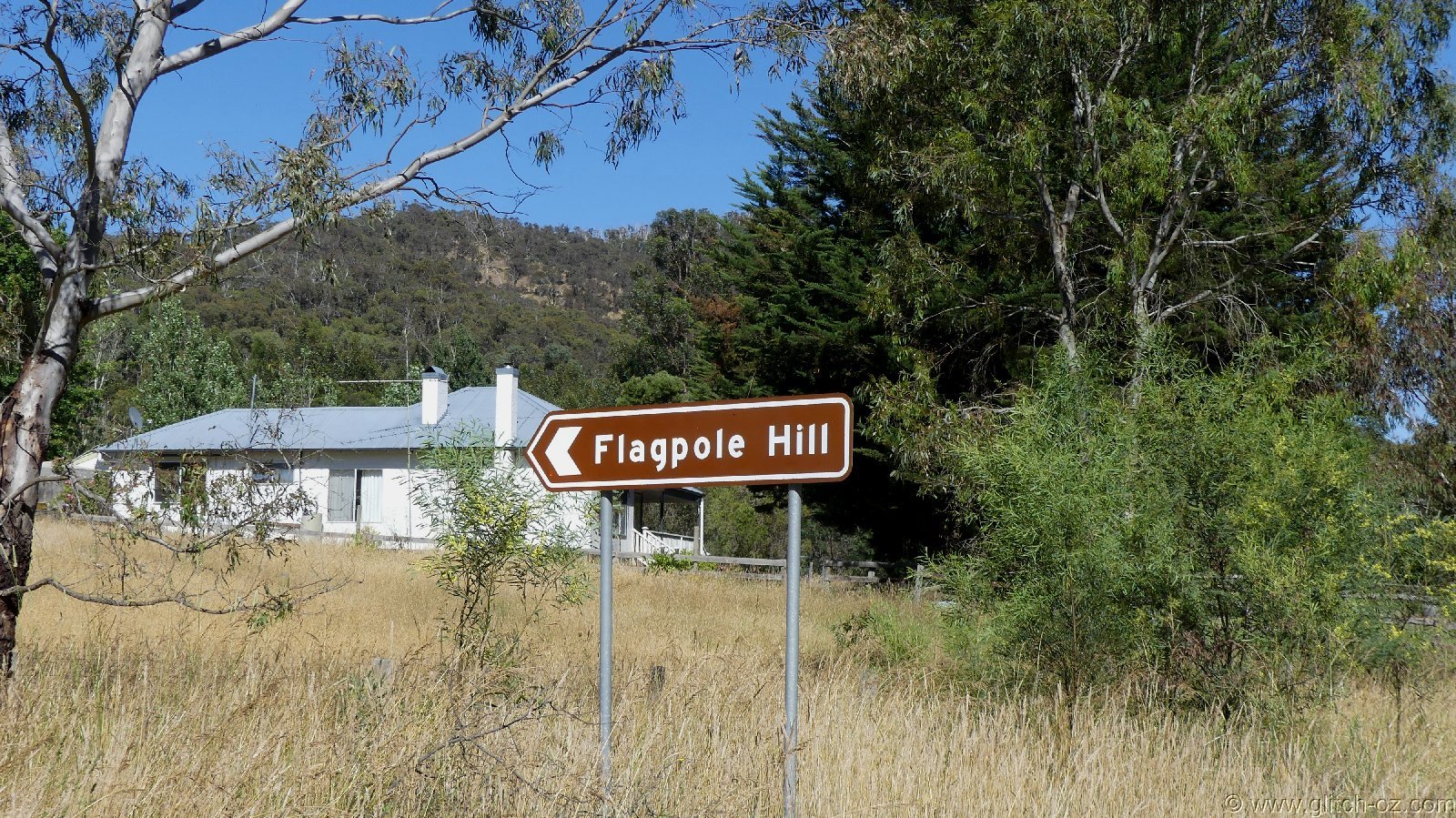 Hmmm, maybe not!? The narrow track looked like the other 2 driveways next to it at the start, then the skinny twin-track split by a center strip of 2-foot high grass and overgrowing verges....then the small tree across the track. Dragged it out of the way just enough to squeeze between it and the rusty barbed wire fence. 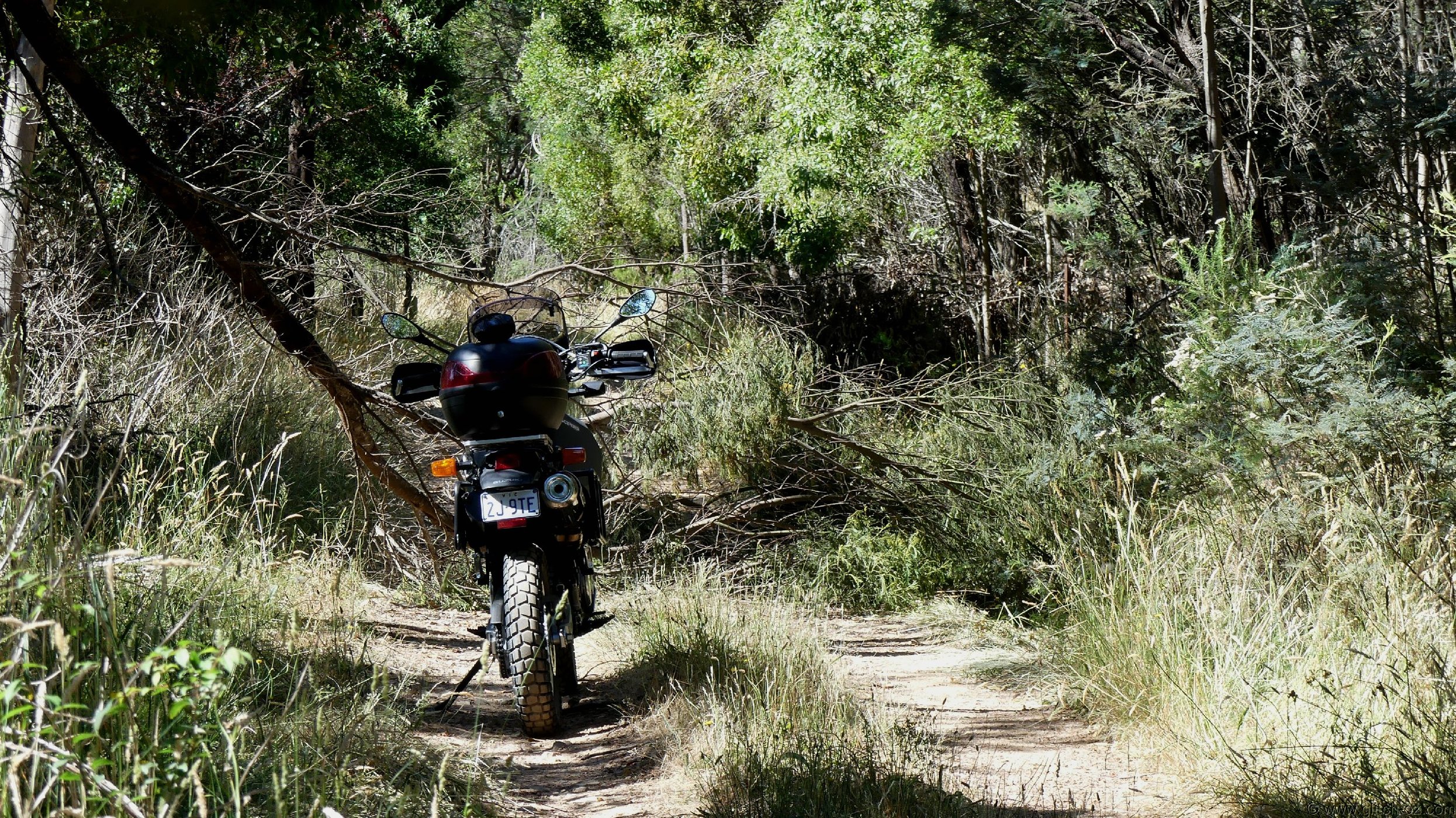 Things got a bit more rugged further in....with a heavily chained and padlocked gate just as the track was starting to actually climb..."the hill-bit" and all that. 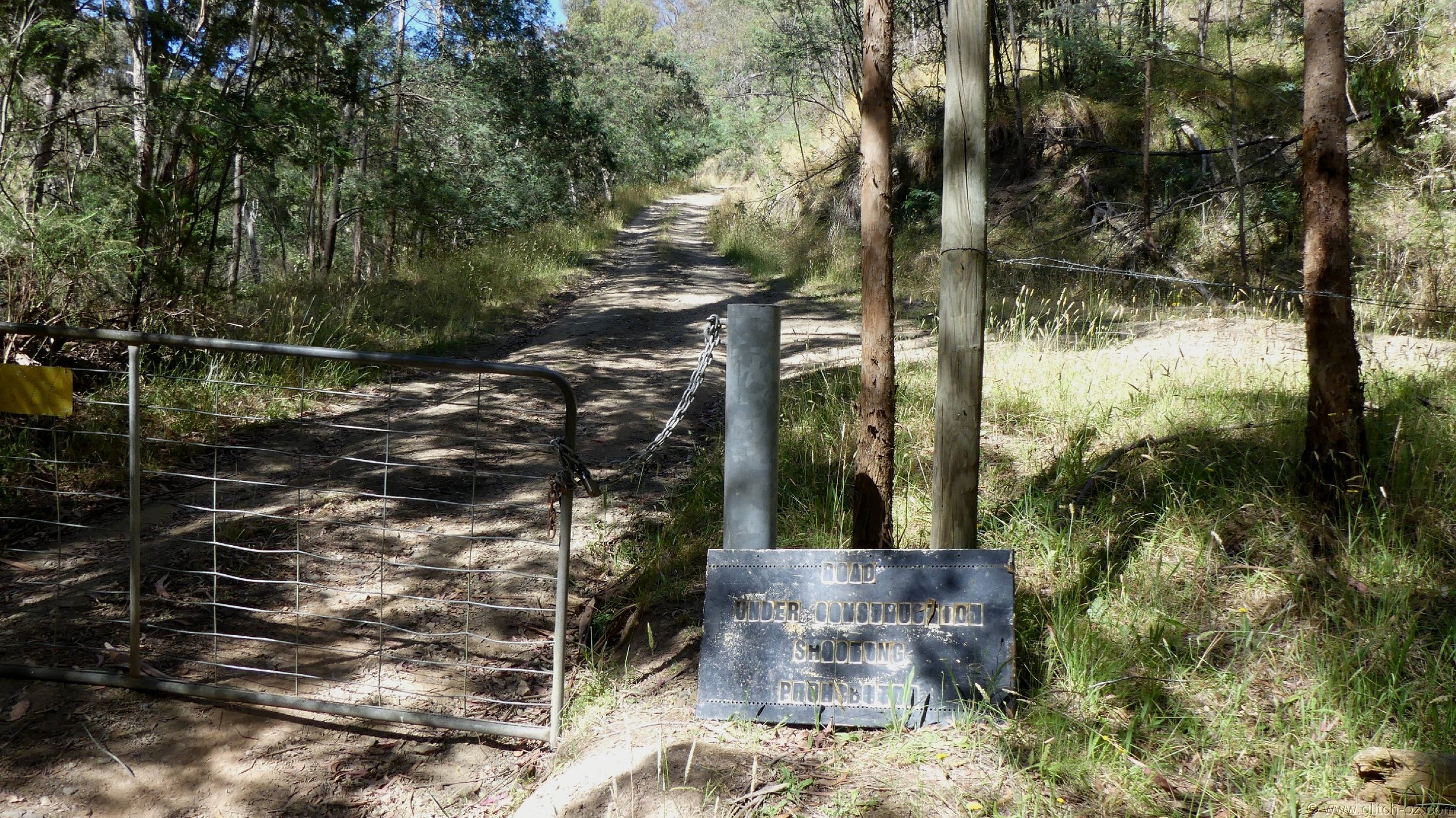 Oros Mela? Whatever that means...but the gate stayed locked 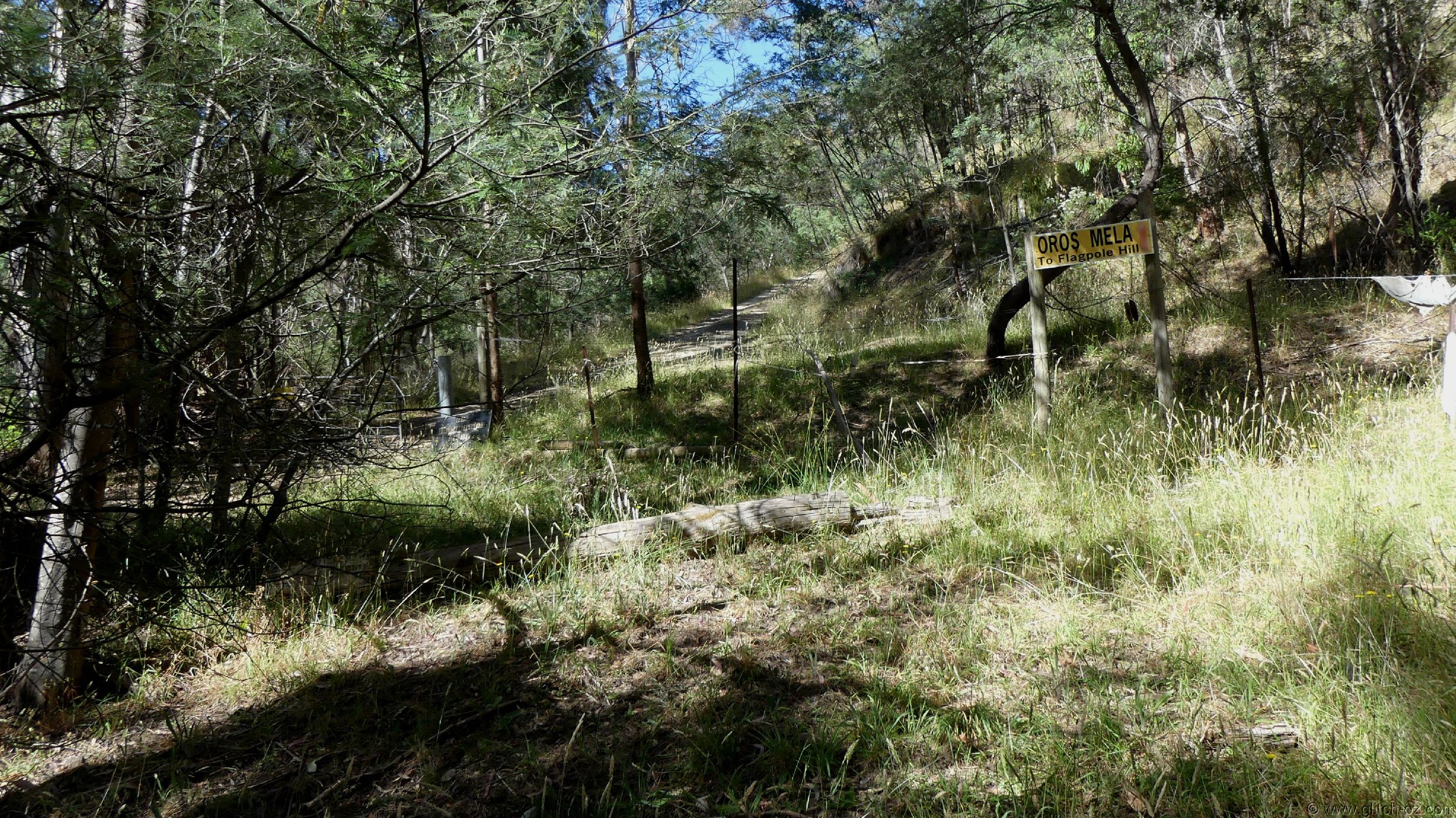 OK, let's drop that and maybe have a look some other time.
Consolation came on the Upper King Parrot 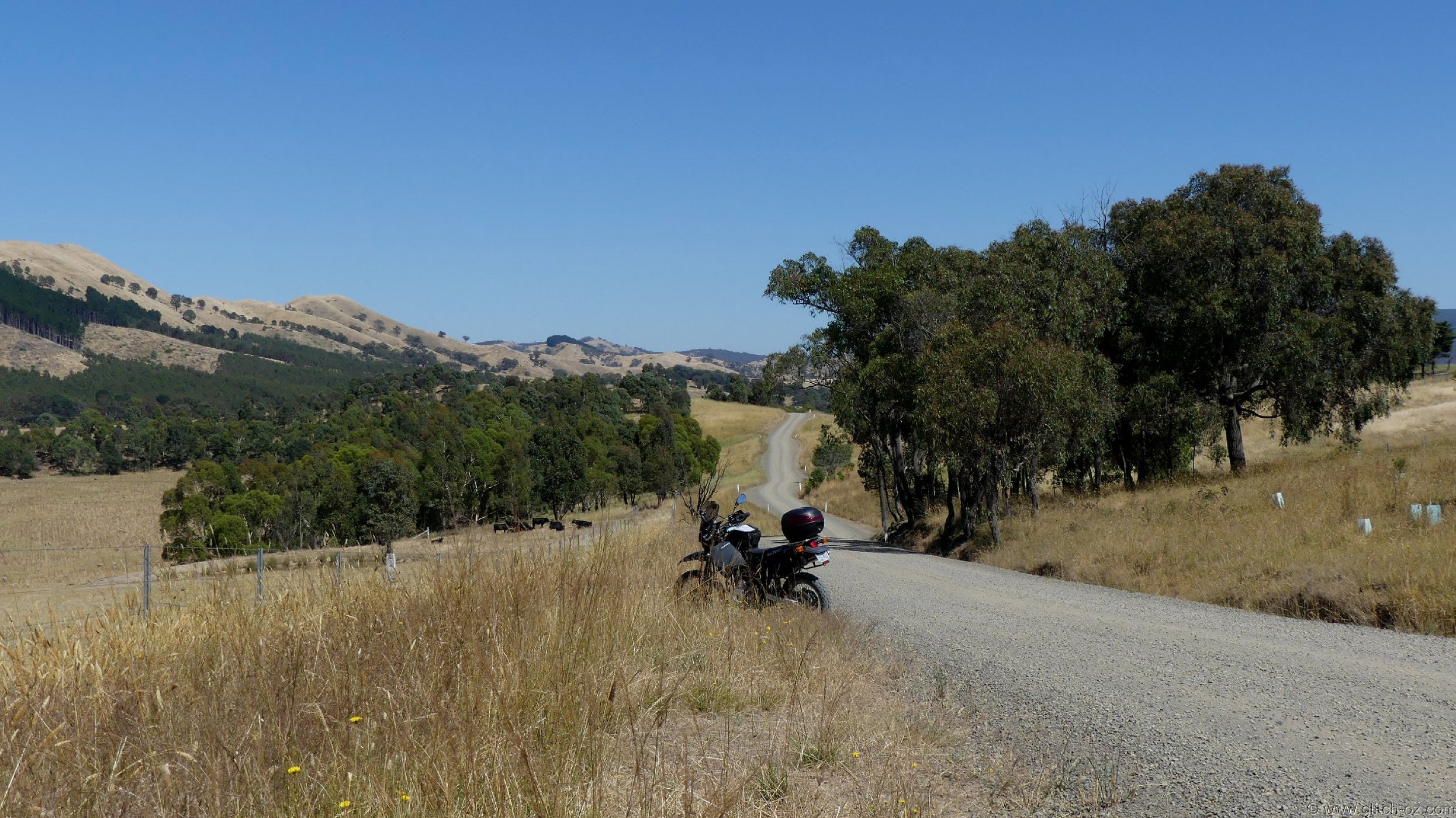 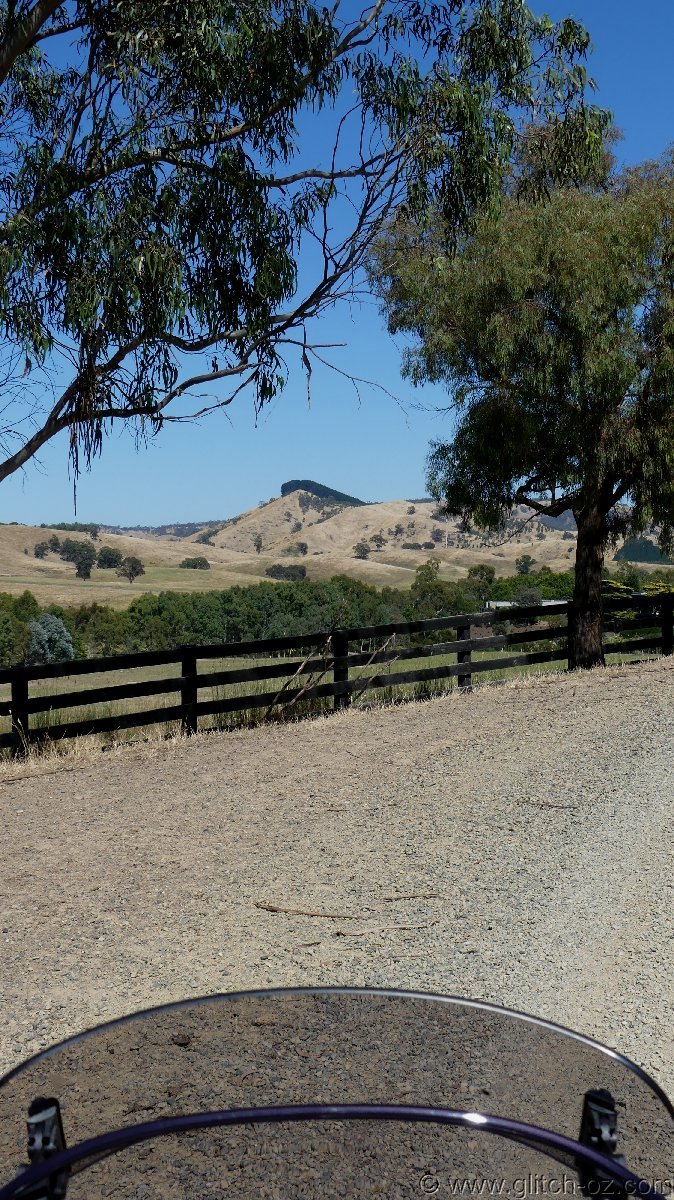 Things were REALLY getting into gear on Horans Track though... 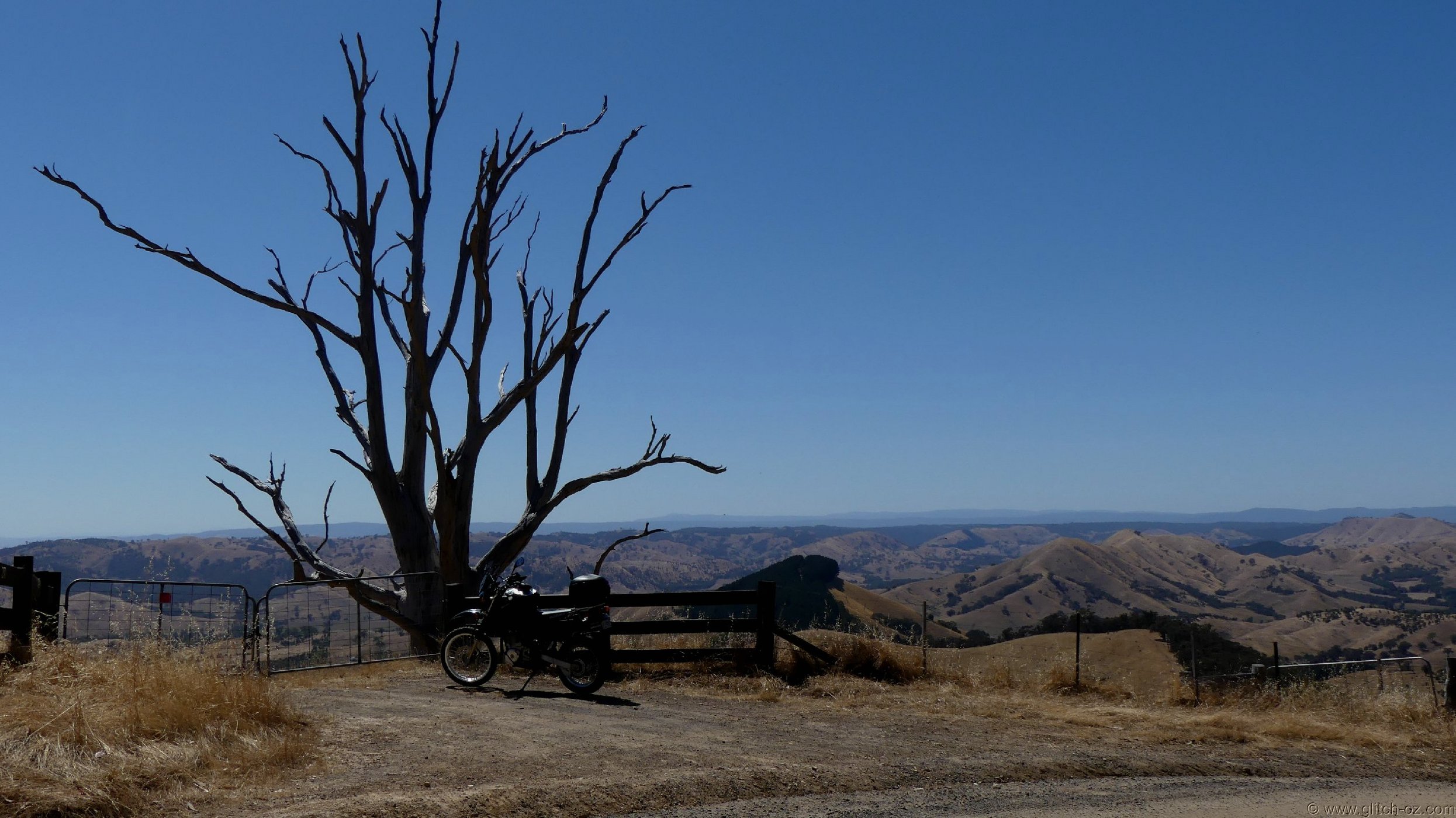 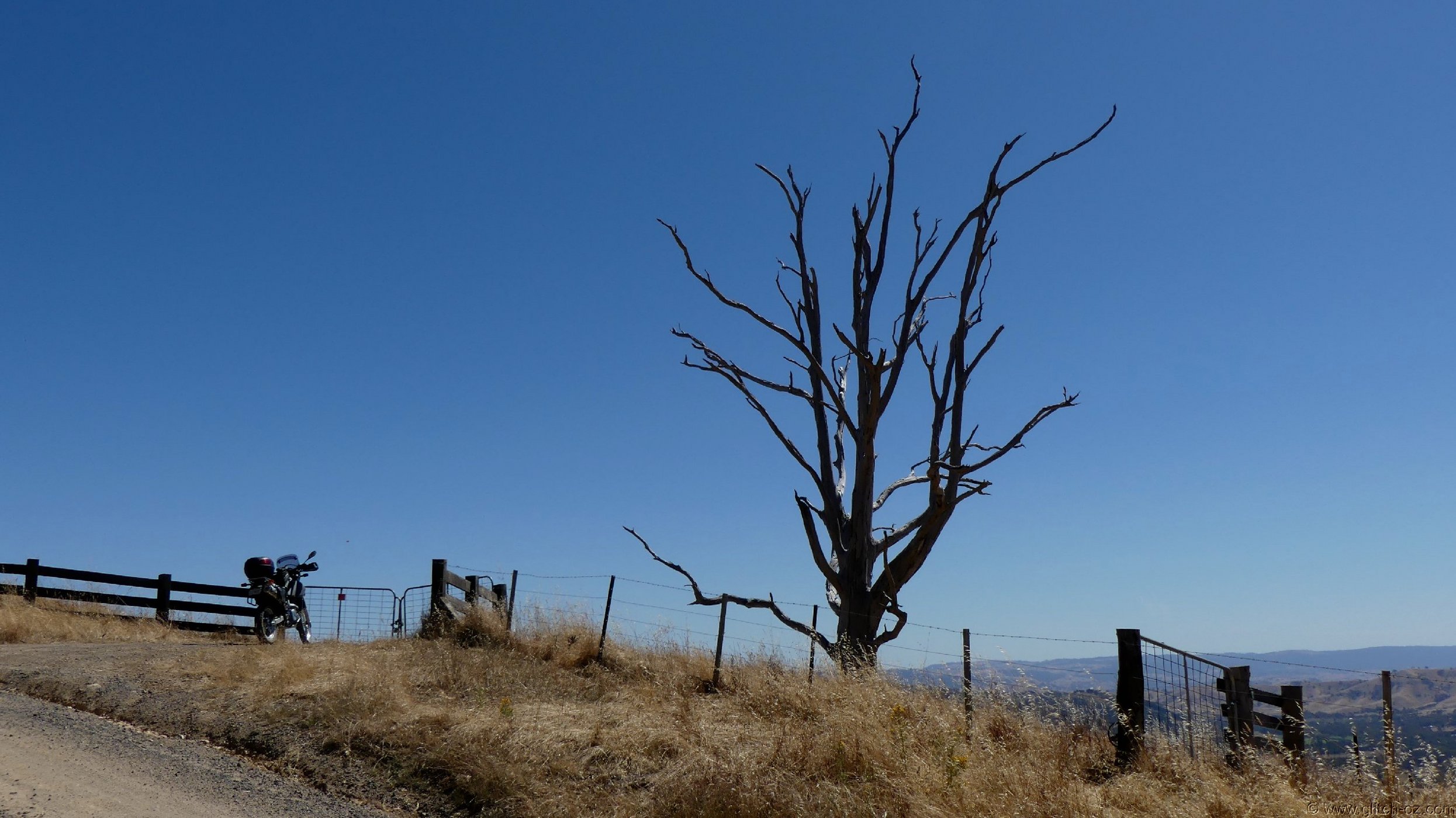 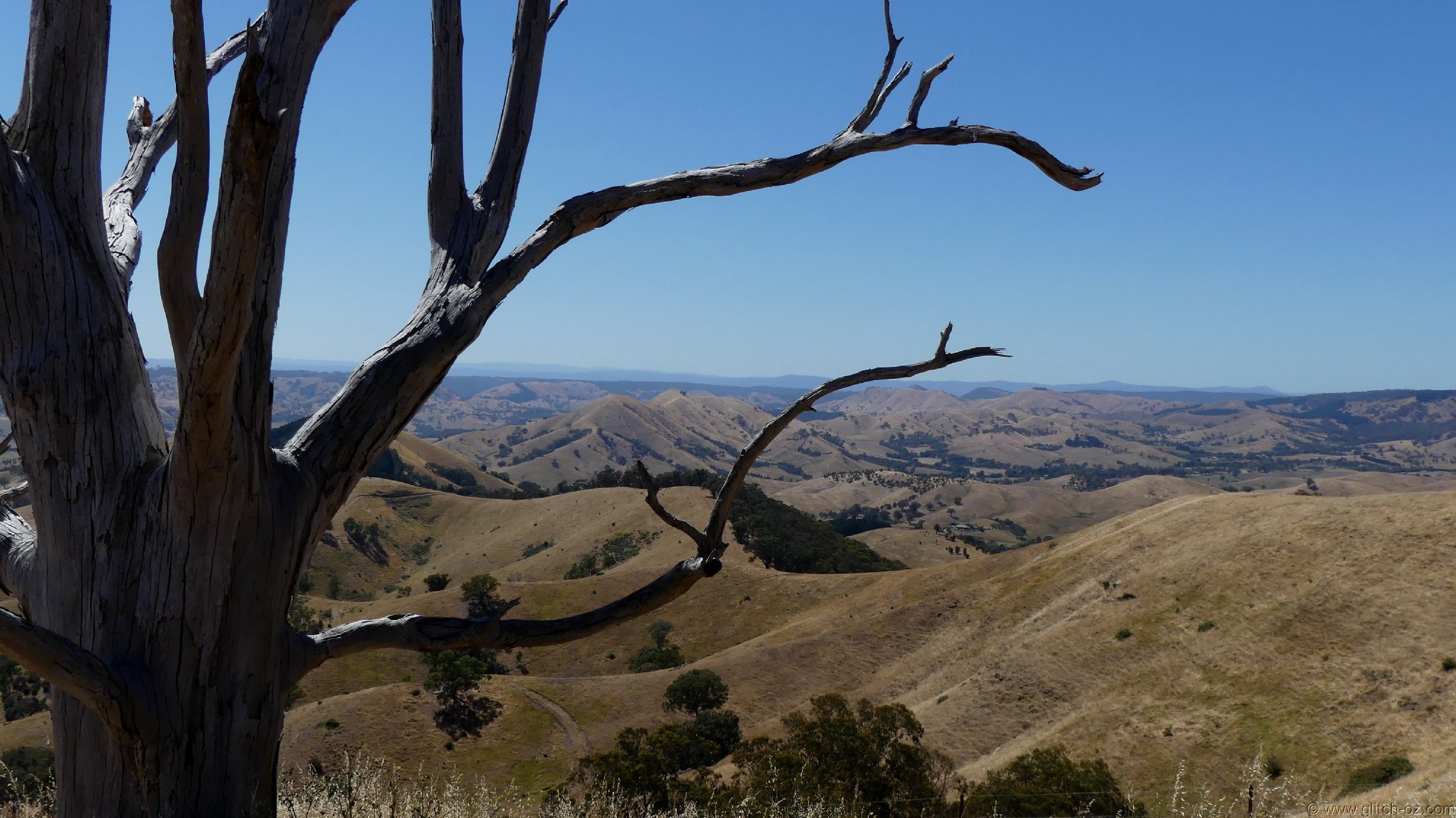 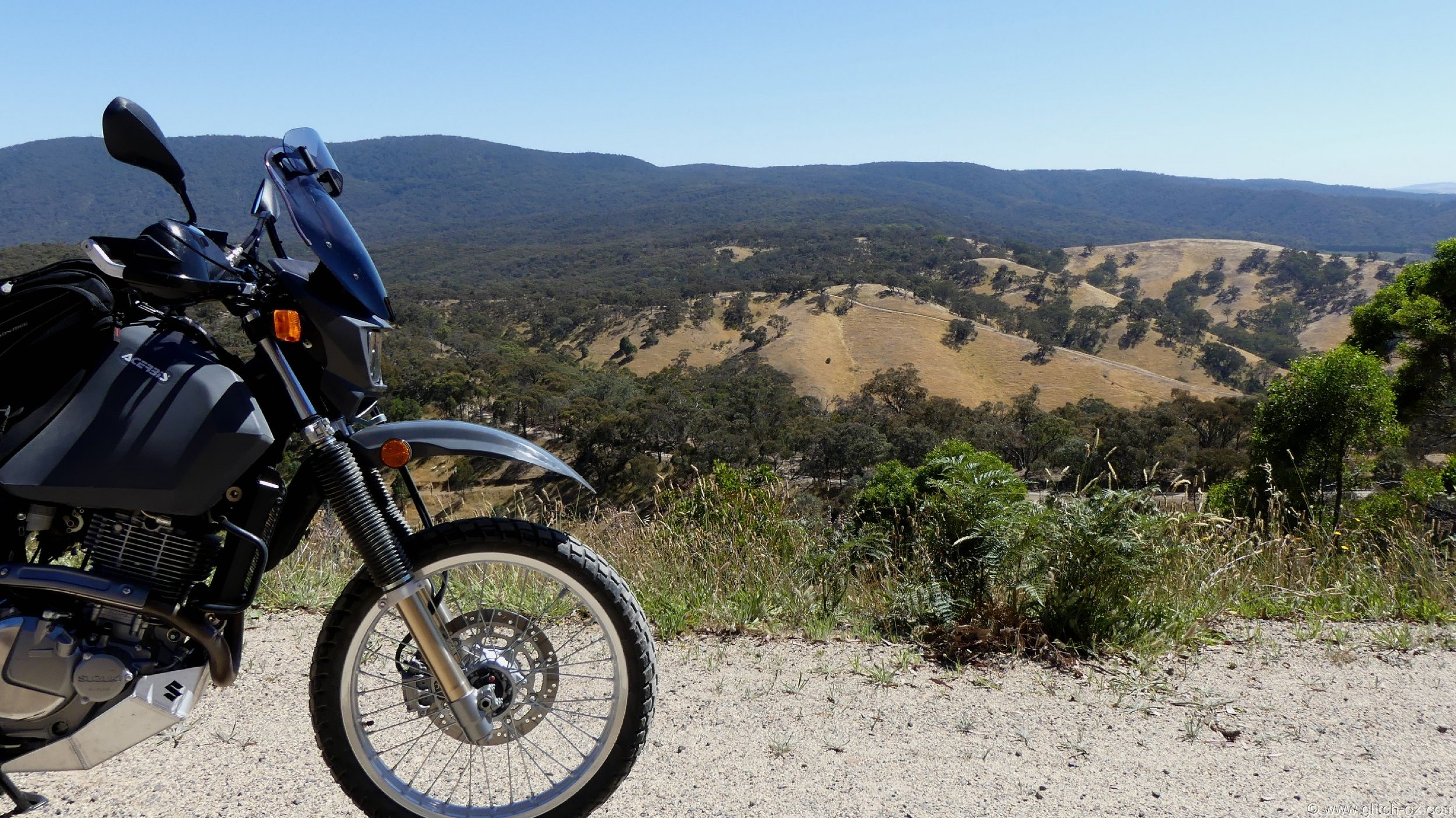 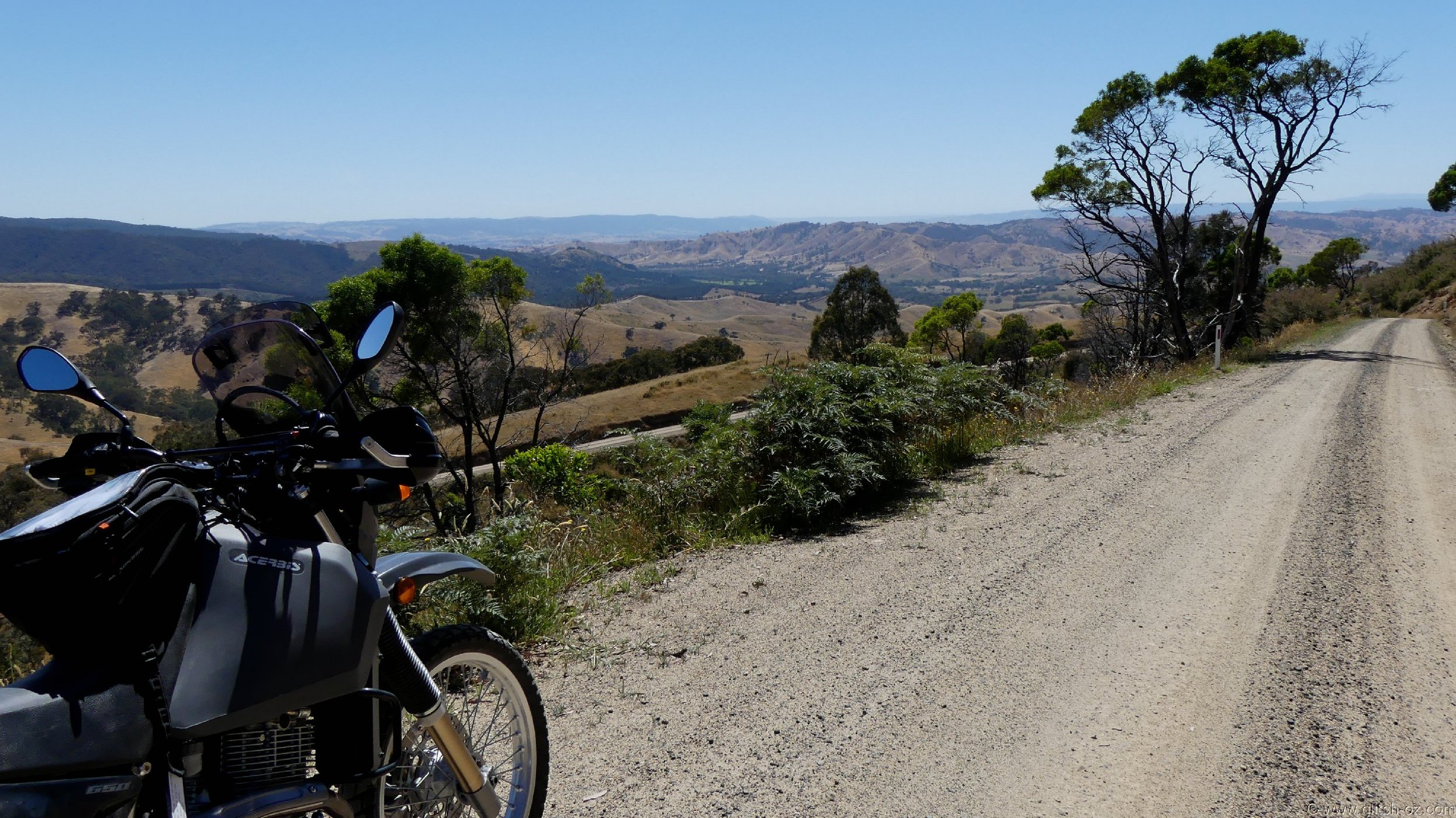 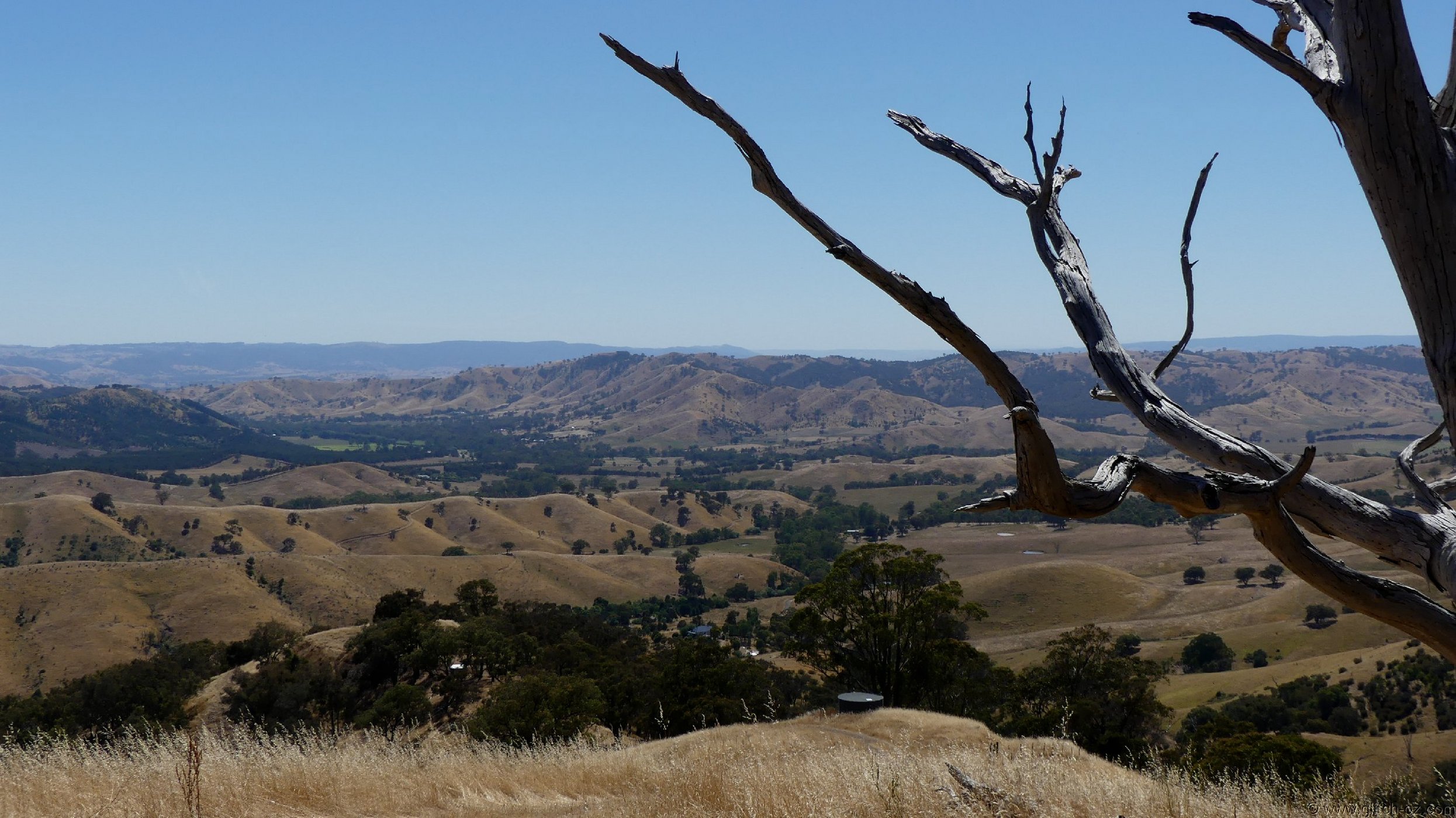 And all in pretty good nick, the State Park portion in far better condition (~roadbike-suitable?) than the Shire-maintained half at the southern end.

How good are those view from Horans Track. Never get sick of going up there.

Staff member
According to the hasty last minute Gmaps check before leaving home, that "Great View" marker just had to be checked out. 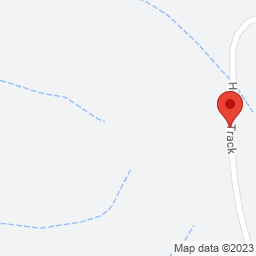 The smooth-sailing along the main track finished right at the turn off to Tehans Rd. 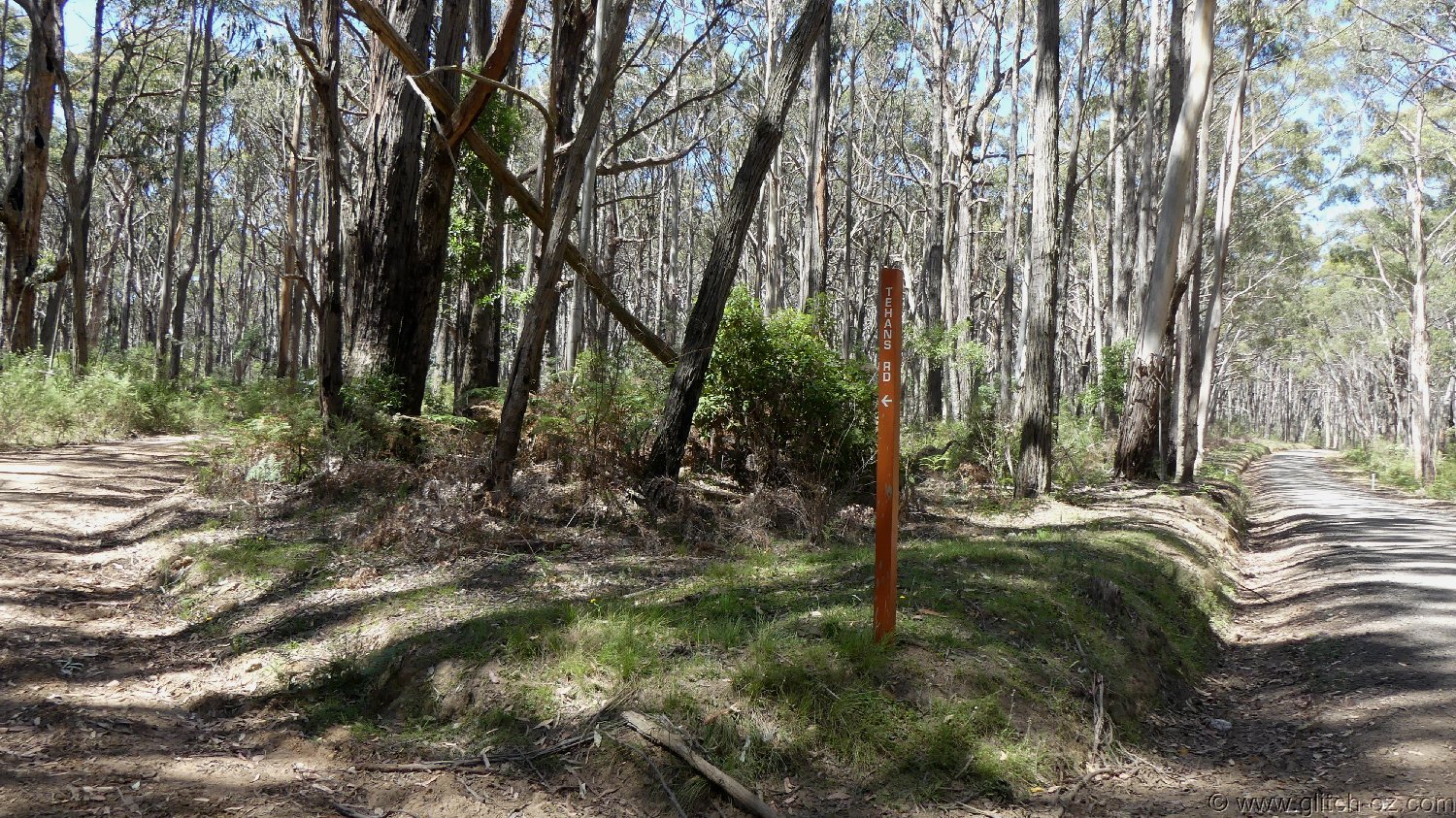 As pretty much everywhere else, the main roads through the Parks are in pretty good nick, where as most secondaries haven't seen any maintenance for the last 2 or more years. Many are overgrowing from the verges, dense undergrowth crowding the actual wheeltracks, lots of washouts, potholes, deep and wide runnels and dropped trees + branches/ all over.
So I found myself exceedingly busy to stay upright and avoid bike- damage, rather than angling for the camera.
But hell, a "Great View" it certainly is! 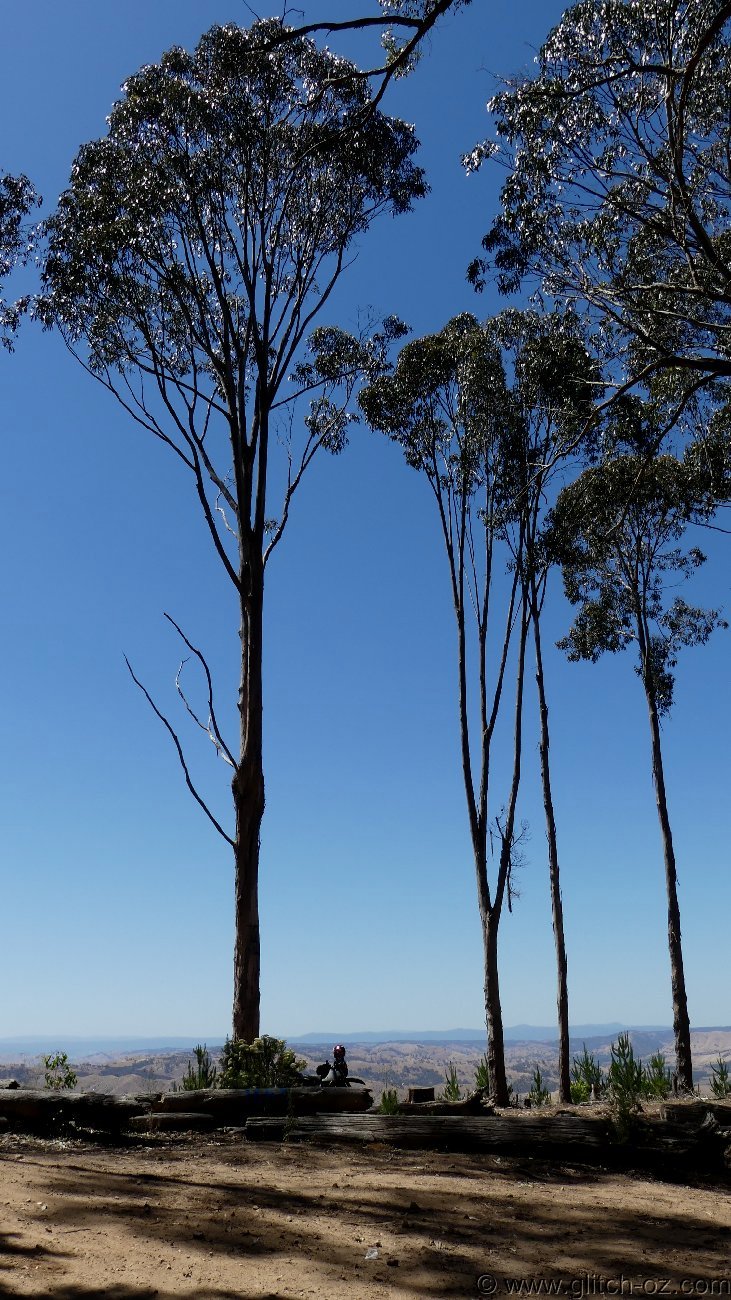 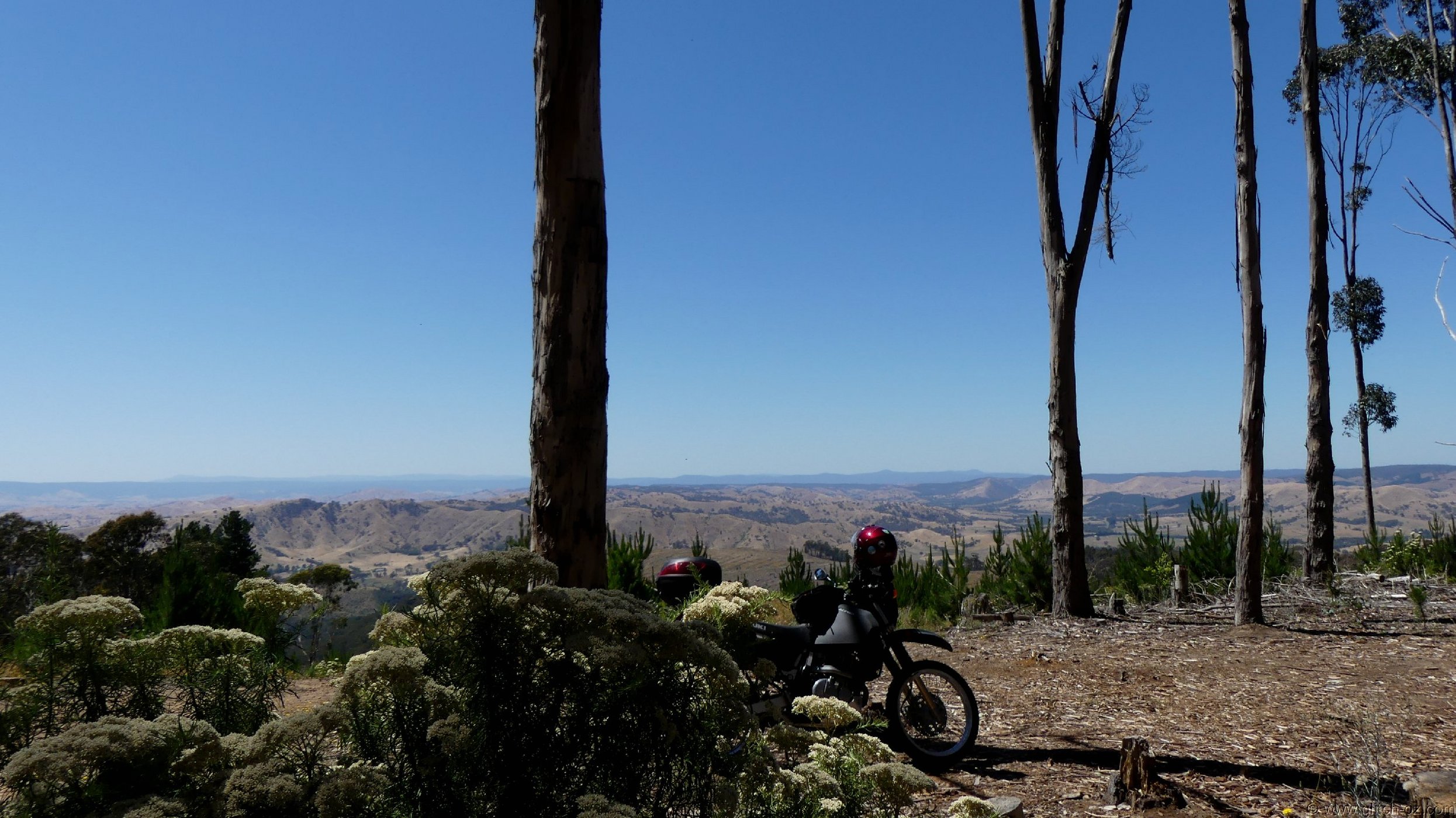 A little scramble back up a couple of short, steep sections to the Main Rd., then popping out of the bush into farmland above Kerrisdale. 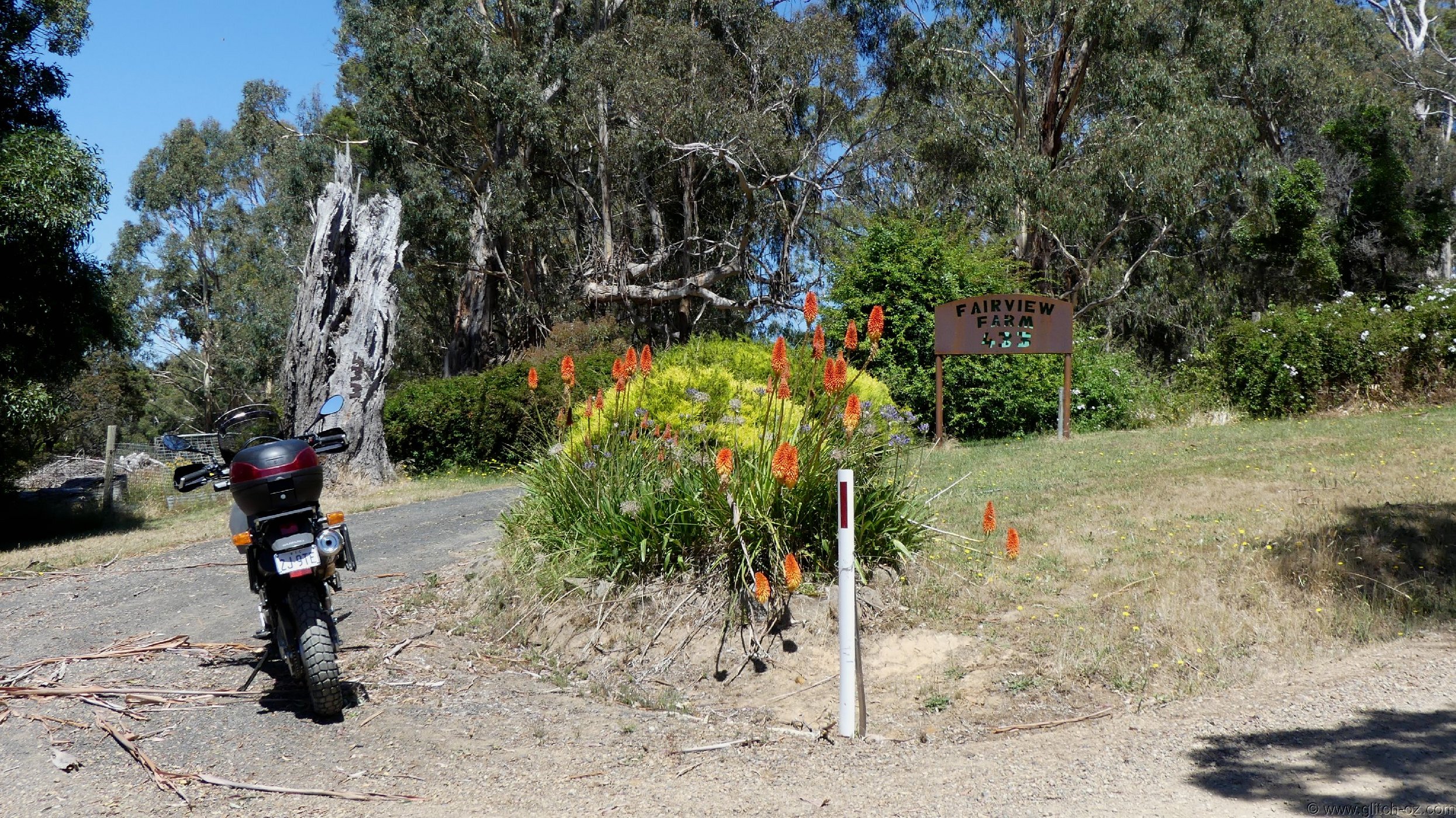 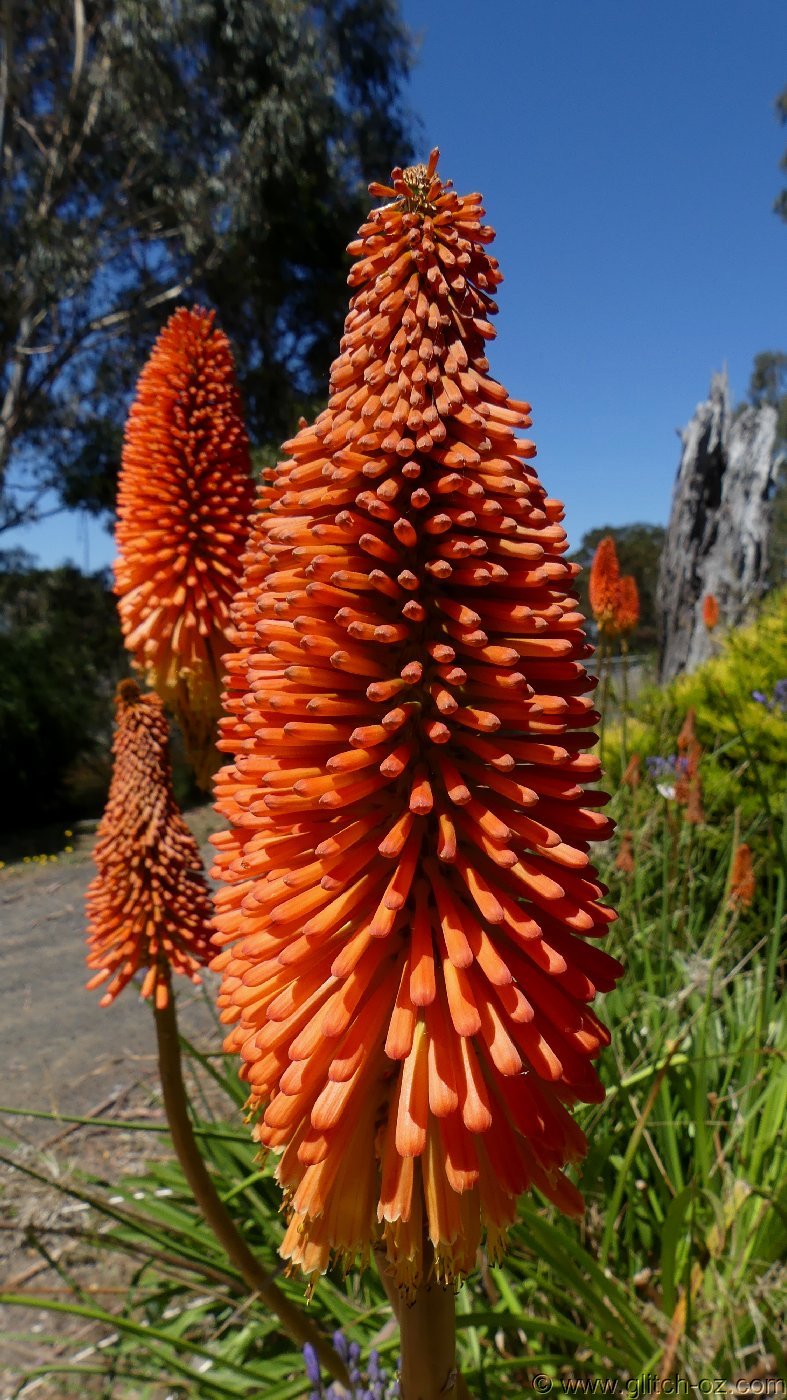 Staff member
Trying to stay away from main roads and holiday traffic, Triangle Rd. and Dairy Creek proved a good choice for some quick but squirrely gravel, zig-zagging through farmland and bush south of Yea. 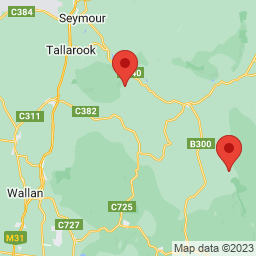 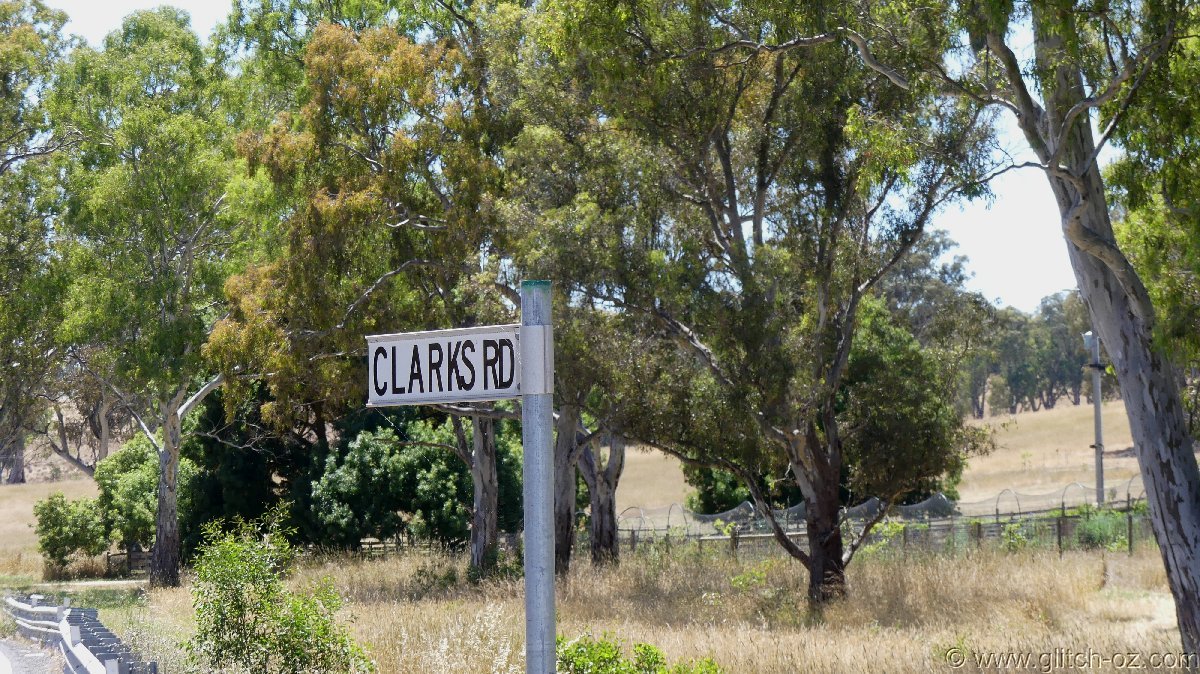 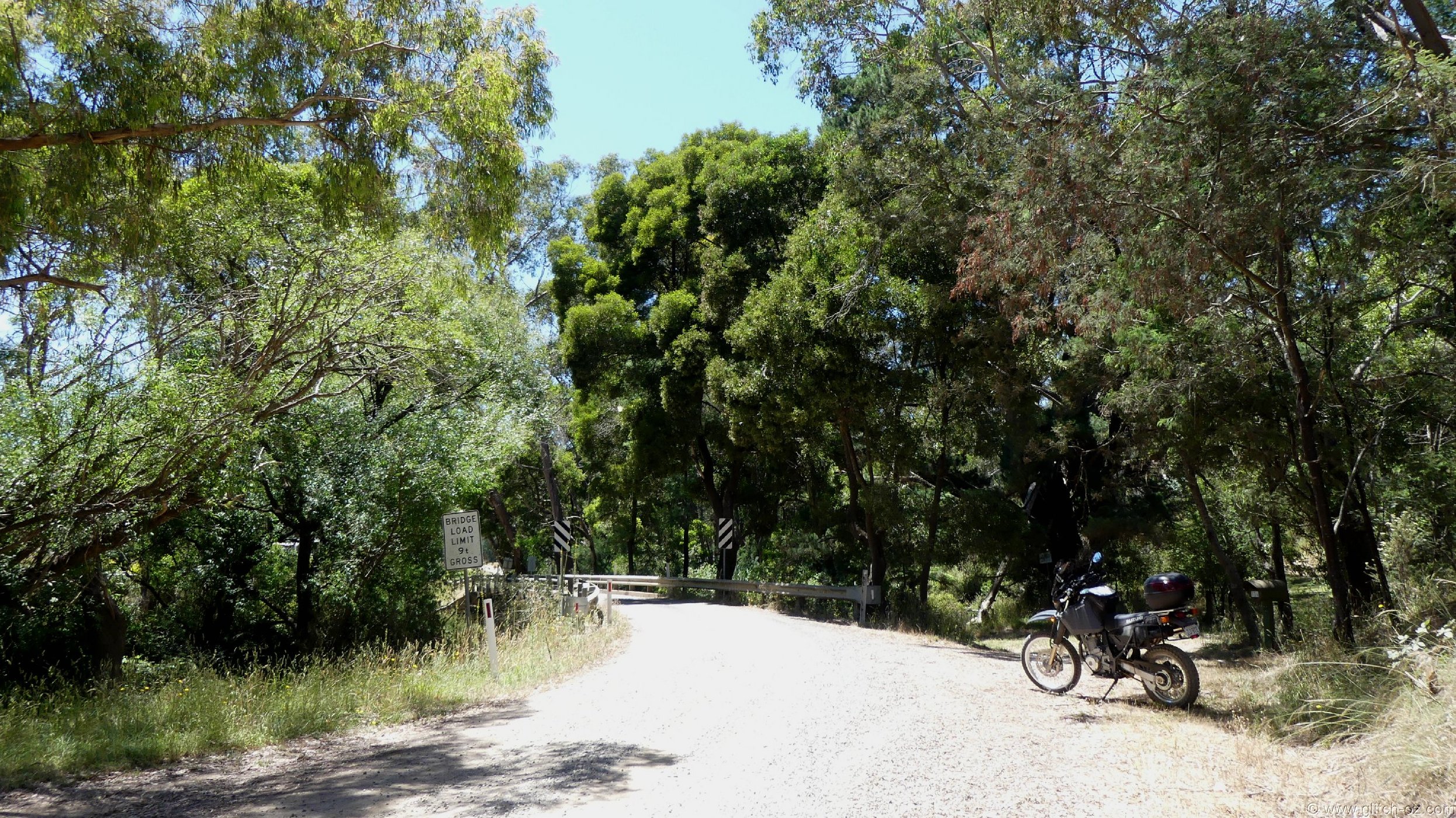 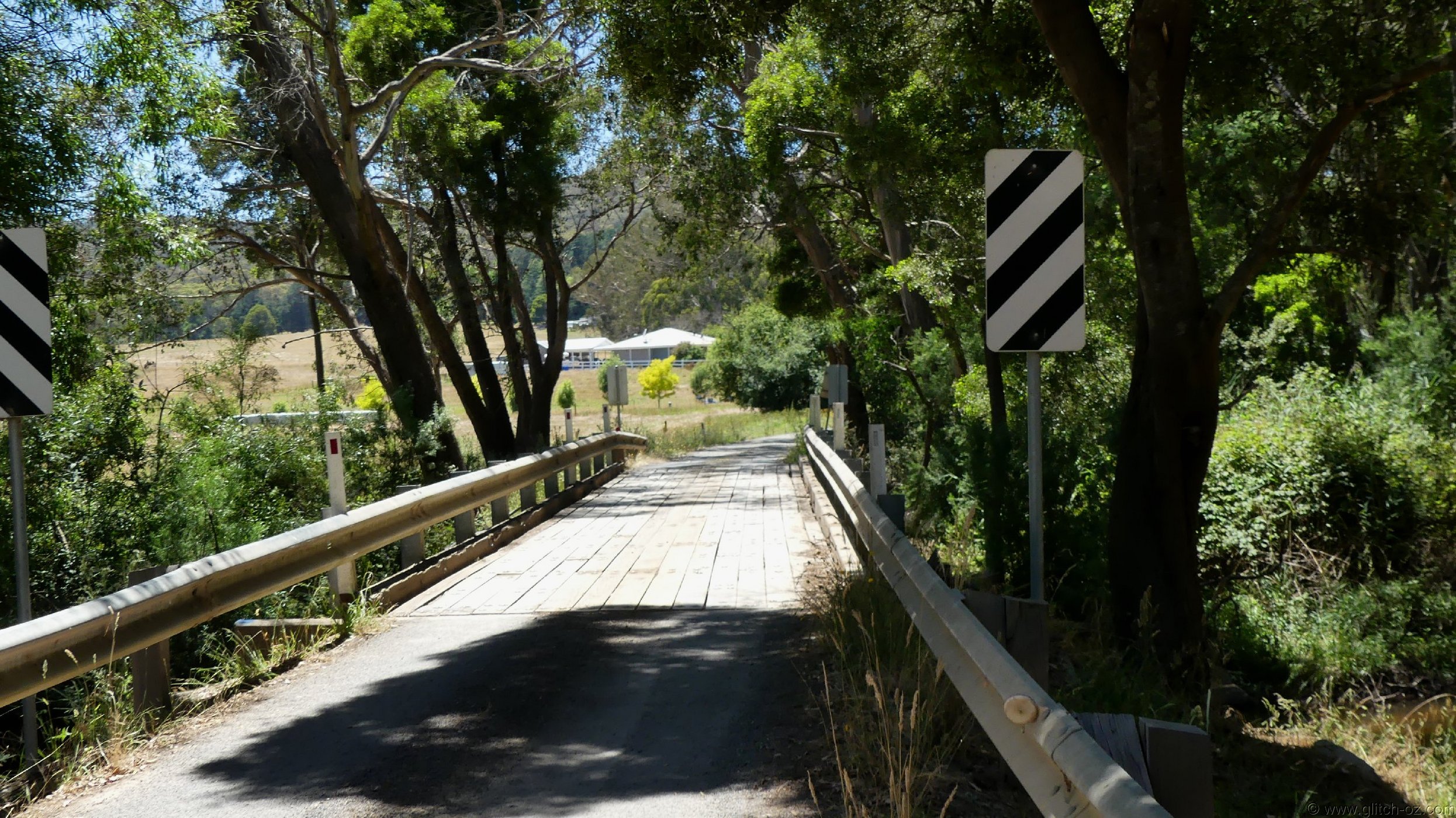 ....while the quiet and deserted surrounds made me fly straight past the planned Marginal Rd. turnoff.
Stuck to Murrundindi Rd/ Sylvia Creek Rd after a quick and quiet lunch (still scanning for Marginal Rd, doooh!) before
nipping off the main road into one of Squizzy's favourites for a more scenic route into Toolangi. 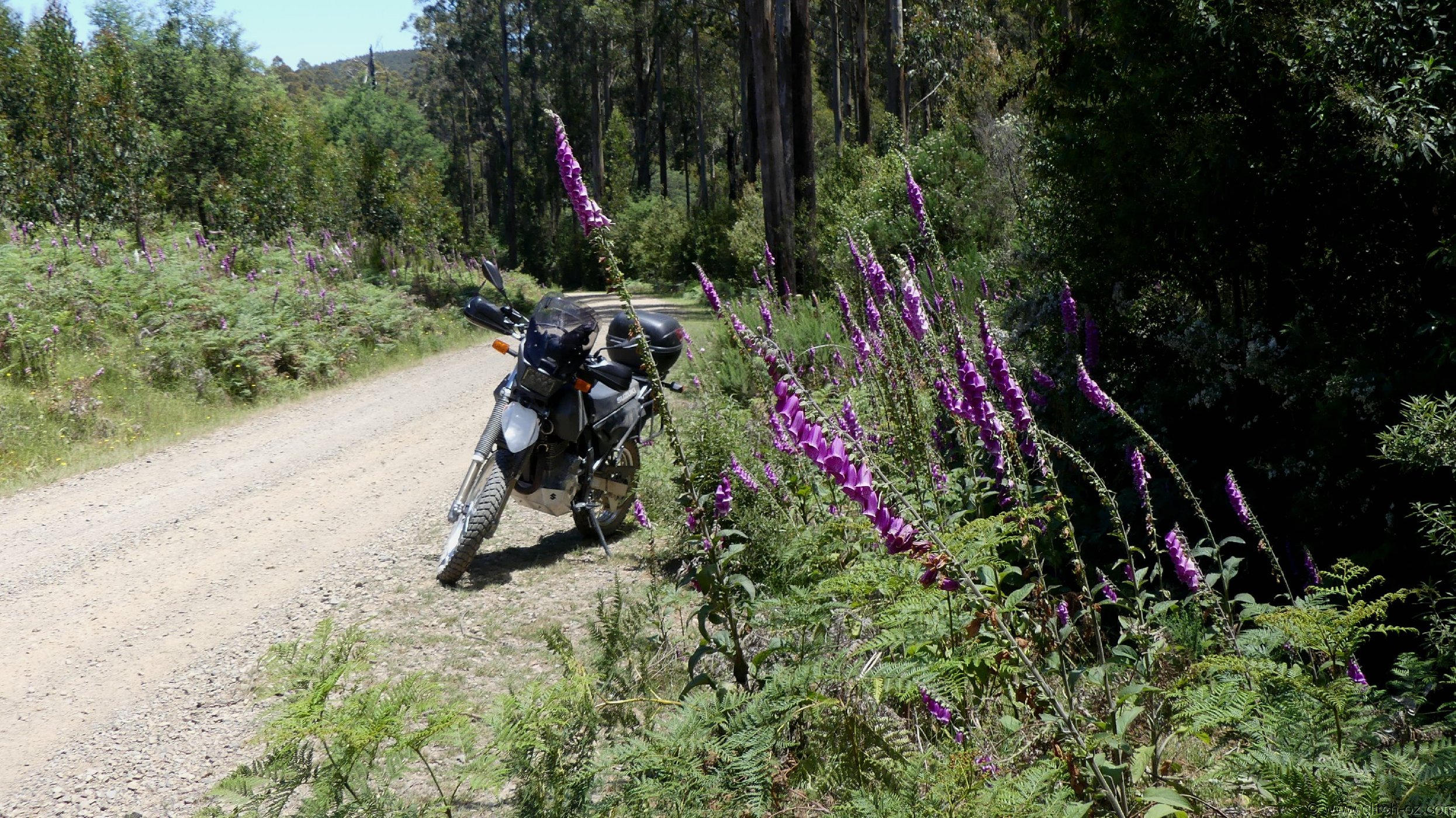 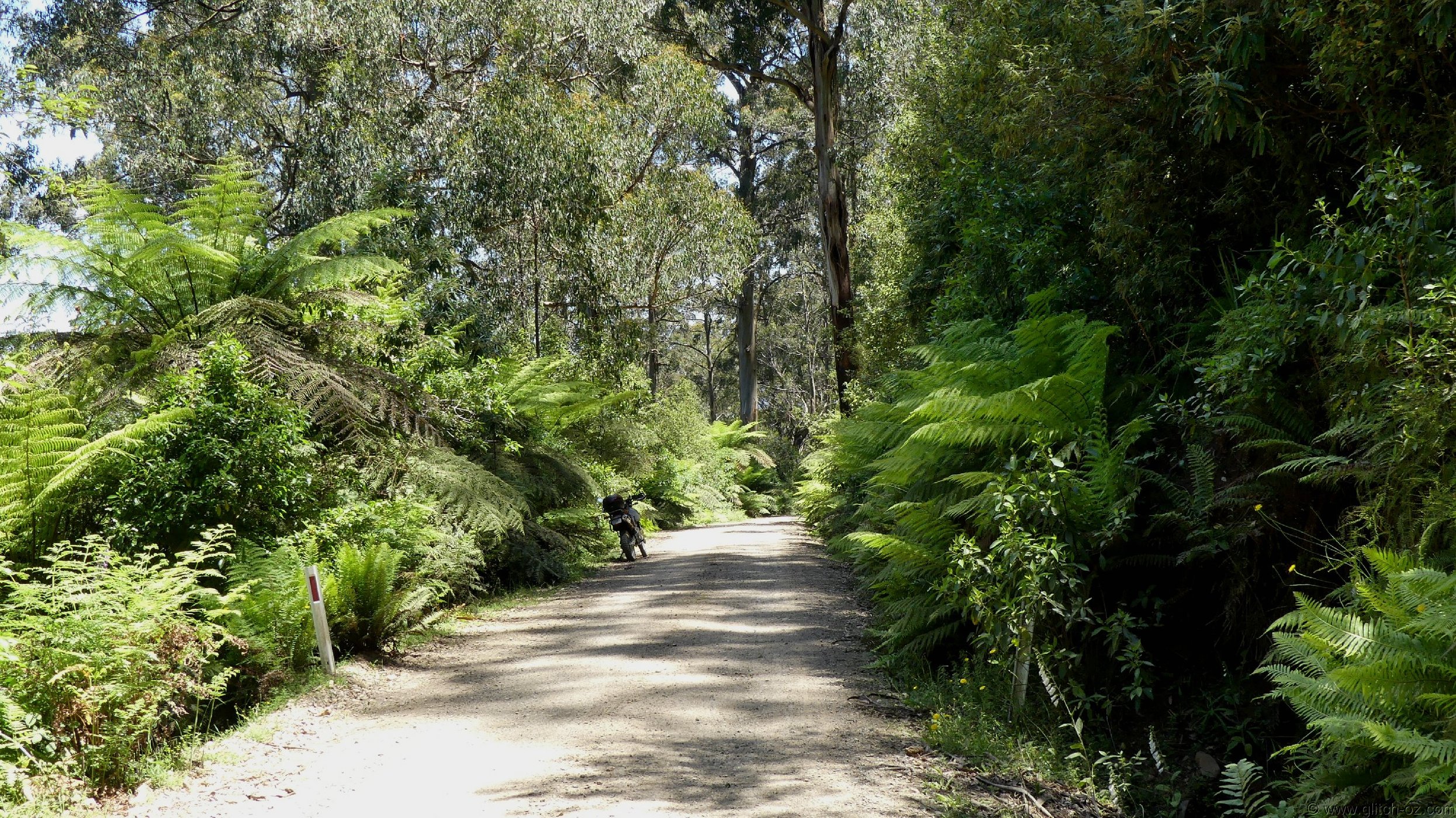 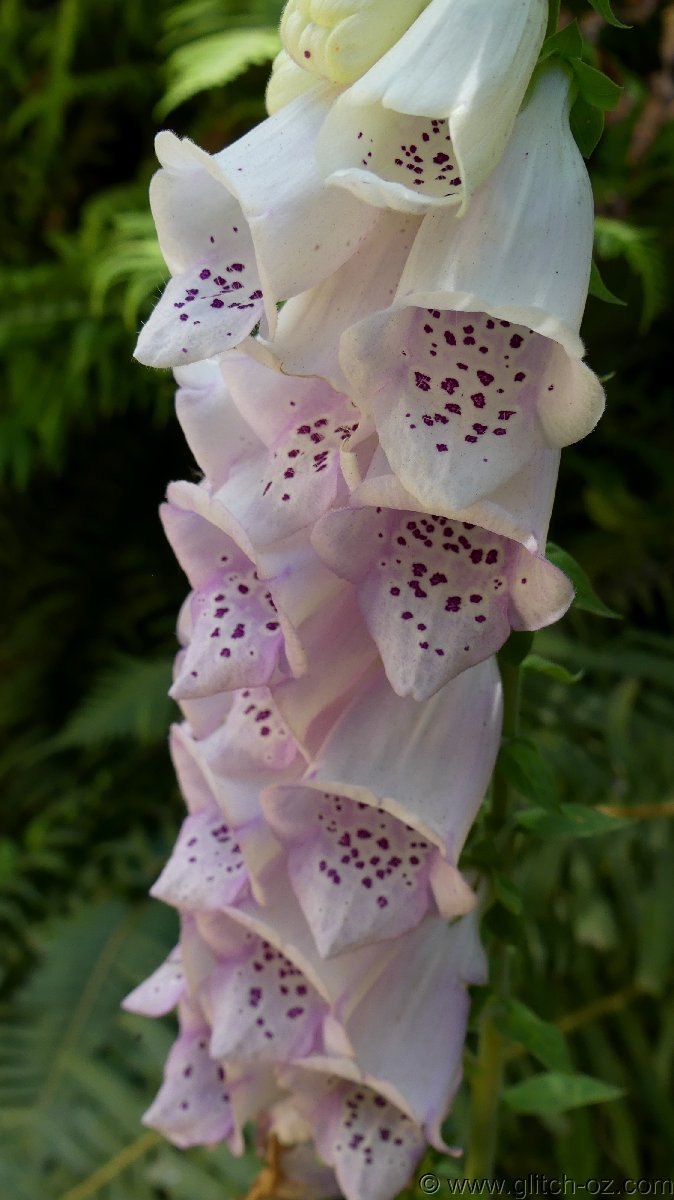 That "Marginal Rd. goofer" was still stinging....something else had to make up for it

Staff member
A quick shortcut via the Castella Rd. gravel for the back way into Kinglake and hey, there's Captains Creek 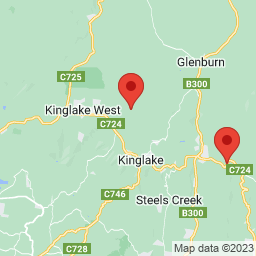 And just when you itch for that little extra spice on a half-boring, cruisy home stretch

Those who know Captains Creek know of the white/ yellow clay base that turns to deep, mushy custard with any decent rain, of which there is a fair bit along the Kinglake Ridge.
The track runs in a narrow, little gully with fairly steep sides and dense bush, now added to by lots of undergrowth and plenty of dropped timber.
Some short bits look like a battlefield, car + 4x4 recoveries are a regular thing here and churn the place to pieces...before it all dries out and turns to cement, some bathtubs deep enough to hide a Mini.
Looks like lately someone had the great idea to throw tons and tons of fist-sized crushed rock into the slush for some traction...which all became part of the mud as it dried, now re-surfacing and breaking out of the clay, pooling in the most awkward places where traction is needed to make it up the slopes. Add the solid green bush growing across from both sides and usable real estate gets damn skinny in places....and just forget visibility altogether.


The smooth bits before + after 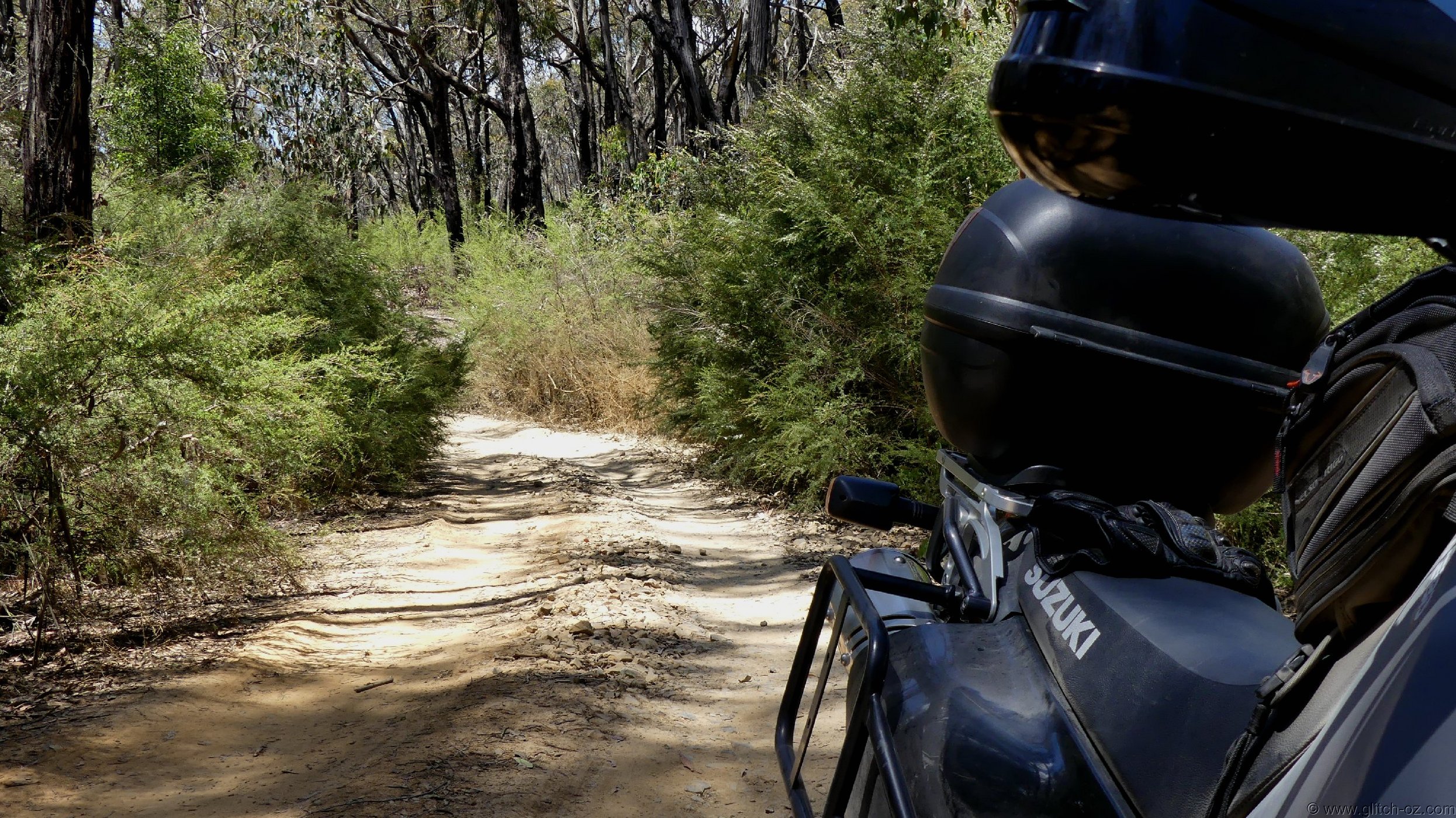 And then there's that really short, really steep bit I had completely forgotten about, right at the back of that gully ...

Was surprised to still see the topbox in place after all the boot-scootin' romper-stomping scrabbling up that rock-filled channel up to the tiny turn-around patch for vehicles coming the other way and quitting out.
The wide-eyed couple in their shiny VW Amarook parked there decided on an instant 8point turn and slowly crawl back the narrow, rutted track to the carpark of Wombelano Falls.

@ Squiz....pissacake for you, mate.
The Tripod would spell trouble though, it's too wide for that section and it's as slippery as hell with the flowery clay-dust and biggish rocks. There is not a quarter inch of run-off or bail-out. 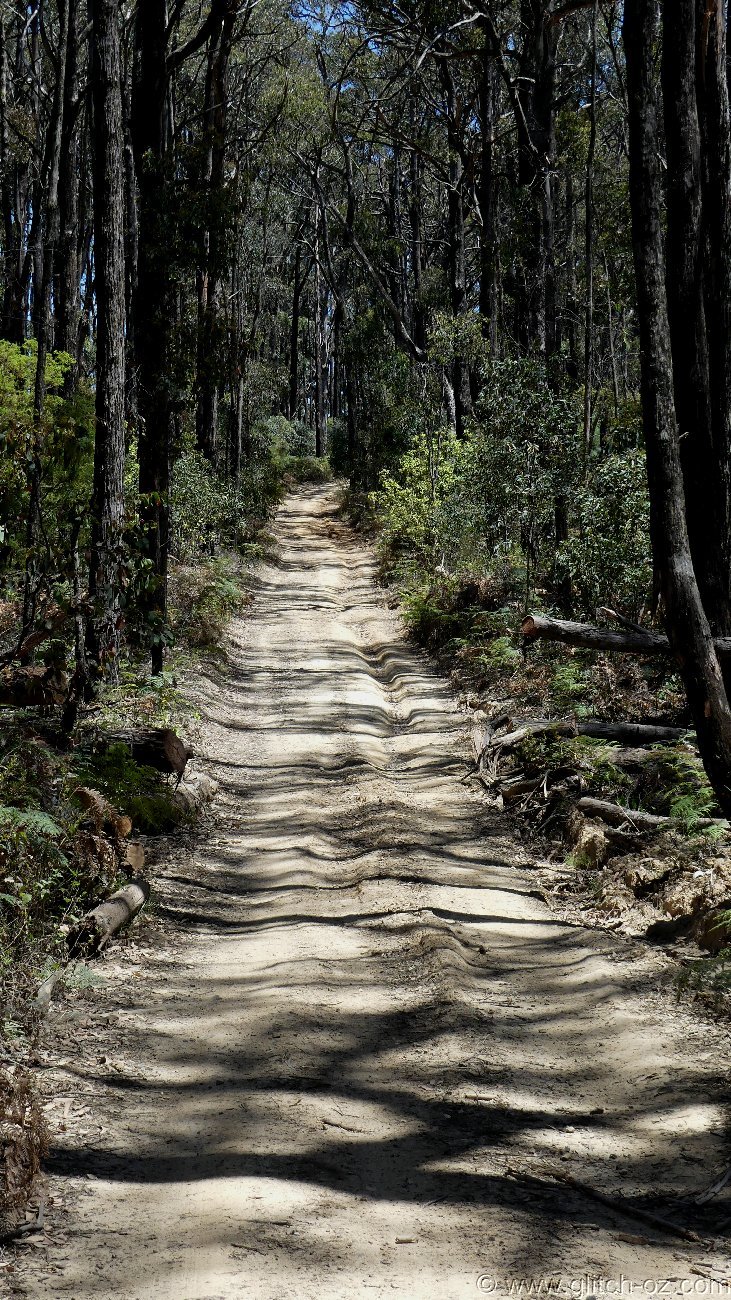 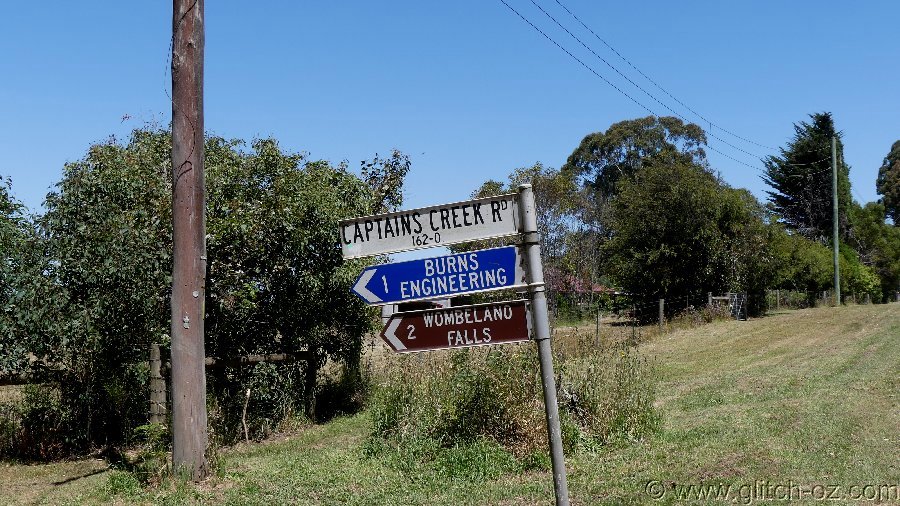 The Bowden Spur was perfect to wind down again, bouncing across the hills and ridges on the way home.

300k's door-to-door
A potpourri of all sorts of riding.
~200k's gravel + dirt
slowly growing from appreciating the DR to really liking it. The "head-buy" is turning into something else.
80 pics in the can
And a big, fat smile on the dial.